Having strode away from the start in Petersfield, Hampshire, at 08:00 on Saturday 25th July with a naive level of confidence, we pretty much crawled over the finish line at Brighton Racecourse at 03.26 on Sunday 28th, some 19 hours and 26 minutes later, having covered 100km, 2500m of vertical ascent along the way (2.5 times the height of Mt Snowdon) and approximately 120,000 steps. This was all across terrain which included loose flint, slippery chalk, ploughed fields, rocky single file paths and Tarmac.

The whole thing was considerably more difficult than we had imagined and our sense of humours failed on several occasions! Thankfully, my team mates were in just as much pain as I was so we were able to get through it by laughing at each other’s misfortune. Suffices to say that I am a broken man now - I do not expect to be walking normally any time soon!

Our time placed us 78th out of 480 teams, which isn’t a bad effort for near 40 year olds whose training meant we were in unchartered territory after the 20km mark! We also hadn’t quite clocked that it was a race until the start line and were simply trying to get to the finish.

Thank you all for your extremely generous sponsorship. It really did spur us on when times were getting tough. Also, seeing the huge number of Gurkhas involved, either competing or running the checkpoints, all of who’s families will have been affected in some way by the earthquakes in Nepal, really bought home the hugely important role that Oxfam is playing in assisting the population in the aftermath of such tragedy.

If you're interested in taking part next year or would like to read more about this event, please visithttp://www.oxfam.org.uk/trailwalker 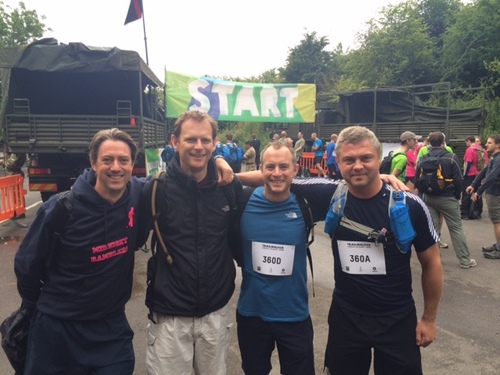