For limited company contractors, agencies and hires, it’s safe to say that 2018 has been a year of prolonged ambiguity.

After the implementation of IR35 reform - the government initiative aimed to tighten up the tax process for off-payroll workers in the public sector - companies operating in the private sector were left uncertain as they speculated the fate of their own contractor workforce prior to the Chancellor’s announcement of the Autumn Budget.

That said, with an estimated £550 million collected from income tax and NIC in the reformed legislation’s first year, the announcement of its extension into the private sector came as no surprise to those concerned.

At the moment, it appears that just like in the public sector, the responsibility to take “reasonable care” to determine whether a contract falls inside or outside of IR35 now lies in the hands of the end client with the recruitment agency, commonly known as the ‘fee payer’, more likely to be the party responsible for the deductions of tax and NICs, should the contract fall under engagement for employment or if the contract has been misclassified.

To determine a contract’s status, HMRC supplied an online assessment tool called Check Employment Status for Tax, commonly referred to as the CEST tool (previously ESSA), however the tool was met with widespread criticism from various experts and public bodies.

Many deemed it ‘unfit for puporse’, while The Association of Independent Professionals and the Self-Employed (“IPSE”) has claimed that the tool oversimplifies a very complicated piece of tax legislation. In a recent article, it said: “Having never had to consider IR35 previously they [public bodies] now have little choice but to rely on a tool that is clearly completely flawed.”

This criticism is in clear reference to CEST’s lack of testing on mutuality of obligation (MOO - click here for infographic). Despite it being a key defining factor in determining employment status, HMRC decided not to include MOO testing in its CEST tool, claiming it assumed that it would be present under every contractual agreement. 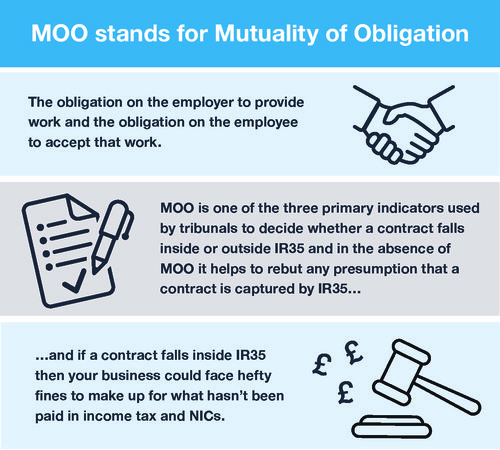 The taxman has been accused of being narrow-minded on this matter, and its unduly assumption is central to the shortcomings of CEST and a key factor as to why HMRC has begun to lose its appeals in the court room.

In the 13 court cases that HMRC has lost to limited company contractors, the ruling judge has emphasised the importance of MOO – because without it, a correct determination of IR35 cannot be decided.

They key taking from all of this is that public bodies were foolish to assume that CEST would be a 100% accurate, one-size-fits-all means of decision making. There are other ways in which you can determine the status of a contractual agreement, such as seeking the advice of an independent expert.

Oliver James is confident in the knowledge that we can provide you – both candidate and client – with expert guidance regarding IR35. We have a dedicated compliance team who are committed to supporting our partners through this time of change.

We will be hosting a series of workshops and roadshows for both our clients and candidates, to help you transition through this time of change and prepare yourself for the incoming implementation of this legislation. Our team of experts will be happy to guide you through any queries you may have in the run-up to April 2020.

For more information on IR35, get in touch with our compliance team at uk.compliance@ojassociates.com